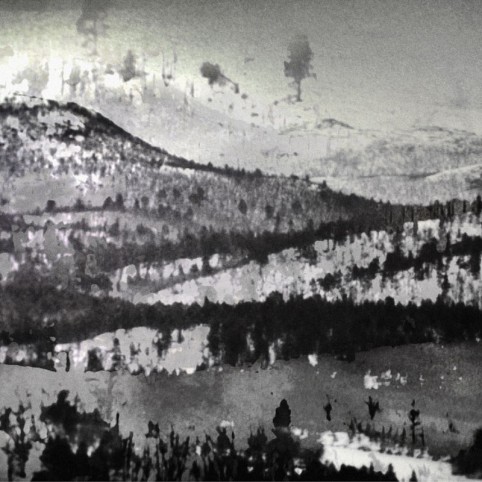 • Erased Tapes artist Ryan Lee West aka Rival Consoles gave his personal touch to the Libretto. His interpretation of this song is so very delicate and again demonstrates the range of the electronic wizard from London.

• Benoît Pioulard worked his magic on Arctic Flowers. One of the next generation artists playing with fire. His shifting and layering of noisy sounds makes him unique in the field of drone music.

Thank you both so much !
Both original tracks are taken from SpringerParker's upcoming release 'There Are Places In Our Heads One Can Travel To'.


Since the year 2008, the two artists have been traveling through the Polar regions of Europe in a motor home, aiming for the northern Norwegian territory of Finnmark with its eight seasons.

During the course of their artistic voyages of discovery, SpringerParker have observed and studied the region collecting photos, sound recordings and stories for their archive – memories which the artists have now embedded in contemporary music, compositions on landscape, the environment and the people.

"There Are Places In Our Heads One Can Travel To" is SpingerParker's first album release. Its German origins are undeniable. The duo balances effortlessly between elements of "Krautrock" (Neu!, Harmonia, "Ralf und Florian" (Kraftwerk), …) and classical minimalism, with a hint of romanticism. Acoustic string and wind instruments find their place alongside electronic sounds and field recordings from their archives. The result is a subtle, picturesque form of chamber music which should delight fans of classical and mainstream music in equal measure.

All of the field recordings woven by SpringerParker into their music have been lifted from the aural archives they have compiled on their travels and are intimately connected to the theme of each piece. Hence "Arctic Flowers" features recordings of thawing permafrost in Knivskjellodden on the Magerøya peninsula, as well as the Gulf Stream climate catalyst where it ends in the Porsanger Fjord. On "Mørketid", or "Polar Night", the dark season which lasts for several months as the sun stays beneath the horizon, SpringerParker deploy recordings of a snowstorm which engulfed them all of a sudden. They affixed contact microphones to wooden Lavvus structures, the traditional tents of the indigenous Sami people, to record this force of nature.
For the centerpiece of their composition, the so-called "Libretto", they enlisted the services of opera singer Lilly Jørstad from Russia, but now living in Tromsø. To create the typical unison of word and song as found in opera, for example, the artists asked the vocalist, 24 years old at the time, to put the noteworthy temperature readings of the region into song, using names of places and data provided by meteorological institutes for recent times.
The topic of climate change was one of the main reasons behind SpringerParker approaching the Goethe Institute with this project in 2007. They read an article in the New York Times reporting on plants in Greenland and Norway which had metamorphosed into flowers due to climate change and information still present in their genetic composition. A fantastic story in the eyes of SpringerParker, for whom memory is a motif to which they often return in their works.
When SpringerParker and Antony Hegarty (Antony and the Johnsons) 2009 were interviewed and filmed by Norwegian television on the subject of climate change and apocalyptic scenarios, they agreed that this is not the time to see everything in the blackest terms, although it is patently obvious that something is wrong out there - you don’t need to be a scientist to recognize that.
"The more time we spent in Finnmark and got to know its people, the more this arctic region of Norway seemed to us like an island with its own rules and principles. Our compositions represent a symphony for this region, based on our experiences and memories. Dedicated to the people carving out an existence there, in the face of extreme climatic, industrial and social upheaval, right now and in the future."
"There Are Places In Our Heads One Can Travel To" was written as a contemporary dance opera and premiered in its earliest form at the "Barents Spektakel" in February 2011. A SpringerParker tour is planned for winter 2012 with an ensemble of seven and a video show, telling their tales through Europe and North America.
////
The rediscovery of the earliest, primeval form of musical impulses through defining worlds of experience, landscapes, peoples and their dialogues. An onomatopoeic translation of real observations, solid analyses and imaginable perspectives. Everything presented, compellingly translated in the language of music. A musical story is told through authentic fragments and the evocation of the seen, making us aware of a process which affects us all, the loss of sustainability and responsibility for our environment.  ( Stefan Reichmann / Haldern Pop )